Victaulic, the leading global producer of mechanical pipe joining and fire protection systems, was honored in the Lehigh Valley Top Workplaces 2015, an awards program presented by The Morning Call newspaper. The company was awarded first place in the Large Employers category and was presented a special award for “Clued in Senior Management.” Victaulic has been named among the Top Workplaces for two consecutive years; last year, the company was ranked number 4 in the Large Employers category.

“It has been proven repeatedly that the most successful companies are the ones that employees believe in, and I am very proud that Victaulic employees feel inspired to respond in such a positive way,” said John F. Malloy, Chairman, President & Chief Executive Officer of Victaulic. “Our company is truly an exceptional place to work because of the dedication of our employees and the passion for customer excellence that is shared across the entire global Victaulic family.”

The Morning Call partnered with Philadelphia-based WorkplaceDynamics to recognize the region’s top employers as part of the third annual Top Workplaces program. In July 2014, The Morning Call encouraged individuals to nominate their employer. A total of 54 local businesses participated, representing 12,900 employees in the Lehigh Valley. The 22-question employee survey covered seven factors: work, manager, pay and benefits, direction, execution, connection and engagement. The program categorized participating companies by size, and awarded honors in Large, Midsize and Small Employers categories, plus Special Awards for leadership, training and benefits, among other areas.

At the awards ceremony, held at the Renaissance Allentown in Allentown, Pennsylvania, on Wednesday, March 4, 2015, Victaulic was named the region’s Top Workplace.

This award marks the beginning of another year of leadership and innovation and caps a notable year of achievement at Victaulic. In 2014, Victaulic was honored with 21 awards for facility excellence, involvement in landmark projects, engineering advancements, community leadership, corporate citizenship, innovation in training and outstanding leadership. So far in 2015, Victaulic and its employees have been recognized with awards for safety, leadership and product innovation.

Victaulic is WinWholesale Fire Sprinkler System Vendor of the Year

Victaulic has been selected as WinWholesale Inc. 2014 Fire Sprinkler System Vendor of the Year. 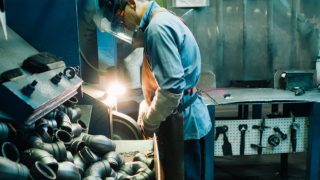 Victaulic has been recognized as the 2015 Top Workplace among large employers in the Lehigh Valley by The Morning Call newspaper.

Connect with Victaulic at PowerGen 2022

Victaulic is proud to support and participate in the advancement of the power industry. Connect with Victaulic Infrastructure at PowerGen!

You can find out more about which cookies we are using or switch them off in settings.

This website uses cookies so that we can provide you with the best user experience possible. Cookie information is stored in your browser and performs functions such as recognising you when you return to our website and helping our team to understand which sections of the website you find most interesting and useful.

Strictly Necessary Cookie should be enabled at all times so that we can save your preferences for cookie settings.